The Shelton Release™ self releasing circle hook. The easy way to release salmon!

Shelton Release™ self releasing circle hooks for salmon. The Shelton Release™ has a sleeve that holds the hook in the straight position while fishing. After the angler catches the salmon, the hook is removed by pulling the sleeve forward either by hand or trip rod. When the sleeve clears the shank of the hook, the hook is rotated at the eye located at the bottom of the hook by pulling on the main line. When the hook has rotated it will self releases.The ease of releasing will help prevent excessive handling in removing hook. Super strong by design and has a built in line protector.

Movie below requires Quicktime to view.
For a free copy of Quicktime for PC or Mac

Quicktime for PC or Mac

A picture of a drawing of the long and short hooks.

A picture of the release sequence of a typical salmon where hook is caught in the jaw. 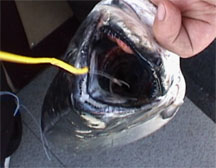 A picture of the release sequence of a typical salmon where hook is caught in the throat using the long sleeve circle hook.

Below is a pictured release sequence of a typical undersize salmon where the Shelton quick release circle hook is caught in the jaw. The salmon is hand released in the water without touching or netting the fish in any way. 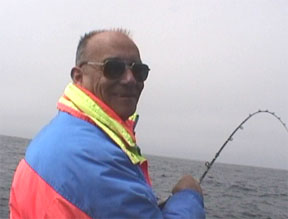 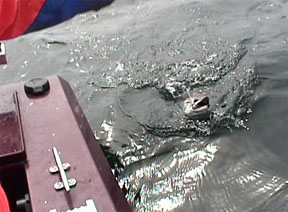 Bill Gygax. The bite, strike and fight. Bring undersize salmon up to boat for a release. 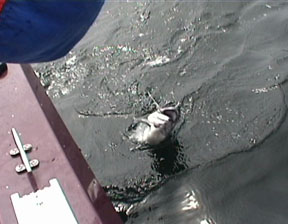 Getting ready to release this jaw hooked salmon. 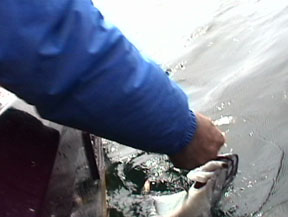 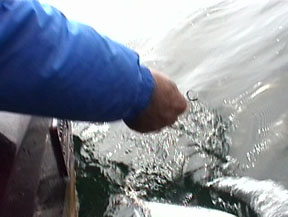 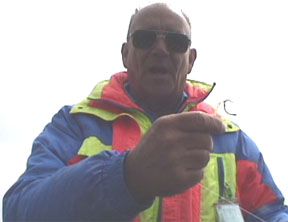 Wow! did you see that? That's absolutely amazing! Bill Gygax of Newark, Ca.

"The fish of tomorrow are the the ideas we plant today" 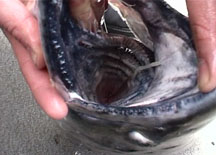 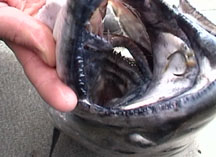 Shelton Release™ self releasing circle hooks. A picture of the release sequence of a typical salmon where hook is caught in the throat with the short sleeve circle hook. So simple, it's like magic. The ultimate release.

Shelton Release™ self releasing circle hook. A picture of the release sequence of a typical salmon using the Boga grip to hold and weigh salmon. So simple, it's like magic. The ultimate release.

Movies below requires Quicktime to view.

For a free copy of Quicktime for PC or Mac

Quicktime for PC or Mac

This is a long sleeve circle hook rig threading instructions.

This is a short sleeve circle hook rig threading instructions.

Rigging up by using a bait threader. Thread anchovie or herring going in at the eye and coming out 1/2 inch below V part of tail. Hook the loop on the end of the leader with the bait threader and pull line through bait. On short sleeve, then just to a half hitch with the top of sleeve just at the half hitch. On long sleeve pull sleeve up for enough until the tail loop shows. Take tip of bait threader and use it to pick up the tail loop where it comes out the sleeve and pull line out and do a half hitch with the tail loop adjusted to where it comes out the anchovie. Rig a tiny rubber band over gills or wrap gill with stretchy thread to prevent gills from flaring when pulling the bait backwards. The ways to rig are endless, use your imagination. Rig with bait head up or down. Use cut plug rigged your favorite way. The hook sleeve is hidden with only the tip sticking out on the short sleeve rig. On the long sleeve rig the top of the sleeve extend an additional inch up line for more line chafing protection.

Thanks for dropping by Shelton Products. We'll leave the Email slot open for you.
Please send suggestions, comments, bug reports and questions via Email to bill@sheltonproducts.com.
All products unique trade names are trademarked. All products are patented or patent Pending
Copyright 2001-2006 Bill Shelton All rights reserved
This page created by Bill Shelton